Alexandra Kennedy is Postgraduate Coordinator and a Principal Lecturer in Art History and Theory and Professional Practices, and supervises at postgraduate level. Alexandra has a Master of Fine Arts. Her practice is located within a context which engages with the zero gesture in painting, addressing the critical relevancy of painting and its ability to reflect upon and engage with its own histories. Hence it could be described as painting about painting, or meta-painting. Making use of the notion of the holes in space created by electronic and digital technologies, there is a reworking this concept as an aesthetic of the void which draws on the conceptual, procedural and material emphasis of non-objective painting and on the conventions of painting as object, formalist minimalism and process based conceptualism. Alexandra exhibits and curates nationally and internationally. As a postgraduate supervisor Alexandra's approach is learner-centred and oriented to theory following practice.

See a list of articles published in issues of: Scope: Contemporary Research Topics by this researcher. 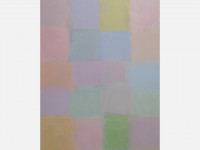 Kennedy, A. (2007) Lost in Space. Solo exhibition of 12 new paintings at Blue Oyster Art Project Space, Dunedin, NZ., 8-26 May 2007. Exhibition Catalogue: ISBN 978-0-908846-39-9. http://www.blueoyster.org.nz/. Blue Oyster Art Project Space founded in 1999 receives major funding from Creative New Zealand to provide a program of experimental & innovative contemporary art practice. Whilst the paintings presented in the show are positioned within the tradition of non-iconic abstraction, the work maintains a semantic element through reference to the virtual ‘holes in space’ of electronic & digital technologies. These technologies create conceptually infinite, limitless spaces which can be experienced as simultaneously empty & full with ‘matter.’ As such these ‘spaces’ are a mirror of the infinite void of the cosmos. Project was foundational for future work presented in ‘Pictures of Nothing’ (RO 8) & Particles in Space (NRO No.1). Both of these exhibitions extend the notion of the conceptual void.

Kennedy, A. (2007) terra_data. Hocken Library, Dunedin, New Zealand. Catalogue essay for the exhibiton terra_data, by Ana Terry at the Hocken Library, Dunedin, New Zealand, 24 November 2007 - 1 March 2008. 2 pages. The Hocken Library is a significant NZ research library, collects widely in relation to the history and culture of New Zealand, the Pacific and Antarctica, with a special emphasis on the Otago and Southland regions. http://www.library.otago.ac.nz/hocken/exhibitions/exhibarchive.html#2007 . The catalogue essay, terra-data, draws on Deleuze & Guattari's ideas of deterritorialisation & reterritorialisation in relationship to representation and the 'framing' of meaning in images and to the spatial and temporal dislocaton of cultural objects and imposition of an alternative scopic regime. Of relevance to my practice & research for the conceptual frameworks which are developed and which can be used in respect to the semantic reading(s) of visual objects.

Kennedy, A. (2007) Lost in Space. Publication of exhibition catalogue essay in SCOPE: Contemporary Research Topics. art 2, November, 2007. pgs 116-118. ISSN (hardcopy) 1177-5653, ISSN (online) 1177-5661. www.thescopes.org. SCOPE is a blind peer-reviewed academic journal with an international editorial board and is published on the EBSCO database. EBSCO is a leading international research database. The essay 'Lost in Space' takes up the notion of the conceptual void in a discussion of aspects of non-iconic abstraction as an 'aesthetic of the void' and charts selected 'projects of infinity' from early modernity through to the 1960s in the identification of historical antecedents for the project. The work is also discussed in terms of Henri Lefebvre's ideas concerning 'representations of space' and 'representational space'.

Kennedy, A. (2006) Painting Methodologies. Published in SCOPE: Contemporary Research Topics. art: 1 2006. ISSN (hardcopy): 1177-5653; ISSN (online): 1177-5661 November, 2006. pgs 100-109. SCOPE is a blind peer-reviewed academic journal with an international editorial board and is published on the EBSCO database. EBSCO is a leading international research database. The article charts the territory of the 'death of painting' historically and represents my early thinking on the manner in which much contemporary painting, arguably a reinvigoration of the medium, cannot be accounted for within established critical frameworks. The ideas presented here were the theoretical foundation for further writing which was published as 'Anachronic' in LIMINA (University of Western Australia) (NRO No. 4) which subsequently received an award.

Kennedy, A. (2006) Painting Methodologies. Lecture and research seminar presented at Victoria University of Wellington, NZ., 24 July 2006. A day-long research seminar including lecture presentation which proposed a theoretical framework for contemporary painting practice. This paper addressed the manner in which much contemporary painting can be identified as fulfilling the conditions of the ‘post conceptual’ and, in doing so, how a position is created for painting as a site for critical practice. It proposed that the work of these artists is representative of a mode of contemporary painting which engages with the theme of the death, or endgame, of painting in particular ways, seeking to create a position outside of both modernist & postmodernist theoretical positions for this work. It proposes that contemporary painting which can be identified as ‘post-conceptual’ lies outside of these frameworks, and can more usefully be defined as 'amodernist.'

Kennedy, A. (2009) Painting as Performance: Dérive and Détournement in the work of Daniel Buren. Aotearoa New Zealand Association of Art Educators Conference, Dunedin, NZ.(ANZAAE), 20-23 April, 2009. Conference paper presentation. Contextualising Daniel Buren’s work as painting which critically reflects on its own history & traditions in alignment with the political dimensions of the Internationale Situationniste, charting Buren's collaboration in an exhibition which consisted of the absence of the artists’ work. Intended as a statement of institutional critique, & of painting’s role within this, this ‘action’ can be understood in terms of the ‘zero degree’ in painting or the so-called ‘death of painting.’ In Buren’s case this extended to the taking of art out of the gallery & into the space of the city in acts of dérive & détournement. Paper published in SCOPE Contemporary Research Topics: art & design 4. ISSN 1177-5653, ISSN (online:1177-5661), December 2009 (released 2010). Pages 14-18.

Kennedy, A. (2008) Anachronic. LIMINA: A Journal of Historical and Cultural Studies. University of Western Australia, Perth, Australia. Volume 14, June 2008. Pages 12-18 (7 pages). LIMINA is a refereed academic journal of historical and cultural studies based in the Discipline of history at The University of Western Australia. LIMINA aims to provide an environment in which diverse work can be published. The journal promotes resistance to traditional disciplinary boundaries, and at the same time demands a rigorous approach to issues of research, context and theoretical debates. In 2005 Limina received the Matilda Award for Cultural Excellence in the field of new media publication. http://limina.arts.uwa.edu.au. http://www.limina.arts.uwa.edu.au/previous/vol11to15/vol14

Kennedy, A. (2008) Projects of Infinity. International Committee of the History of Art (CIHA), 13 - 18th January 2008. http://www.cihamelbourne2008.com.au/. It is well understood that the rise of conceptual art in the late 1960s and early 1970s has been associated in critical discourse with a two-fold decline in painting. Painting not only lost favour as a method at this time, but also its position as a pre-eminent field of practice was challenged. This presentation considers the manner in which the practice of painting has responded to challenges to its ongoing validity as a site for critical practice through an engagement with the theme of the death, or endgame, of painting & is relevant for my practice as it identifies the theme of meta-painting.