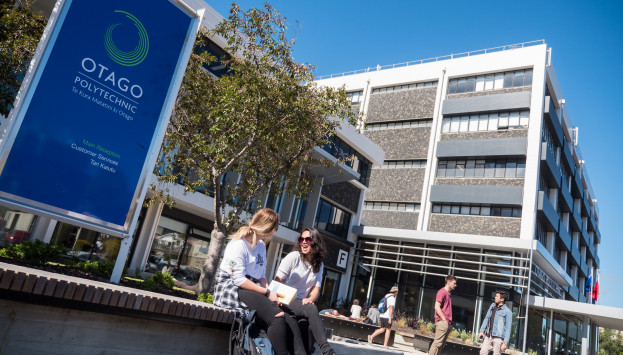 Otago Polytechnic’s value to the Dunedin economy has increased by more than $100 million in the past five years.

Viewed on a cumulative basis, Otago Polytechnic added more than $844 million to the Dunedin economy from 2015-2019.

The report also assessed the flow-on (or indirect) total economic impact of all Otago Polytechnic’s activities – including its Cromwell Campus and Auckland International Campus – to be $464.3 million in 2019, up from $444.5 million in 2018.

Over half (64%) of that flow-on expenditure across all campuses was driven by student spending. The remainder was derived from day-to-day Polytechnic expenditure and the impact of staff spending their wages and salaries within their local economies.

Otago Polytechnic is one of Dunedin’s larger employers. In 2019, it employed 539.2 full-time equivalent (FTES) staff at its Dunedin campus, where 80.7% of students and 81.4% of staff are based.

“The past few months have witnessed societies, institutions and businesses readjusting to the realities brought on by a global pandemic.

“Certainly, there has been much use of the term ‘pivot’, of being nimble in a fluid environment, among organisations big and small.

“Otago Polytechnic has long been known for such nimbleness,” Dr Gibbons says.

“Our willingness and ability to remain open to collaboration, to engage with industry and community as well as lead, will be even more crucial.

“We all need to position ourselves so we are agile enough to both stimulate change, as well as react to changes, to take the opportunities that present themselves, think about our futures and what is important to us.”

Otago Polytechnic Chief Executive Dr Megan Gibbons is one of judges for the annual Otago Sports Awards. Joining Dr Gibbons on the judging panel for the Otago P...

Otago Polytechnic graduate Katie Mangai has gone to extra lengths to ensure others are able to celebrate their academic success in style this week.Katie, who wi...

A group of Otago Polytechnic learners is catering – literally – to the culinary needs of fellow Dunedin students isolating because of Covid.Otago Polytechni...

The next fortnight promises to be a whirlwind of activity at Otago Polytechnic, as we celebrate our annual Student Showcase.Student Showcase is about promoting...